Next time you get a chance, closely observe a puppy. Orio is a week-old puppy. He is busy all the time: he eats, sleeps, plays and explores everything around him. He is learning all the time primarily using nose, tongue, and teeth! His brain is constantly changing with all the new learning. Slowly it is changing him for good. Cognition is one of the primary functions of the brain. Cognition is essentially a process of acquiring and understanding knowledge using senses, experience, and thought.

Is it possible to improve cognitive process in children? We decided to examine this question through a research study on effects of brain training programs in children. Our research team chose Mahbubnagar to observe a group of students who were undergoing Brighter Minds training. Brighter Minds program is a training program aimed at improving cognitive process by enhancing key abilities like Focus, Observation, Comprehension, Intuition, Empathy and Confidence.

Mahbubnagar is located adjacent to Hyderabad city in the Telangana state of Southern India. During the year 2017, the district administration adopted Brighter Minds cognitive training into its school curriculum. It was the heartfelt need within the district leadership, to give more to the government students than the routine education, that led to this initiative. The school teachers were trained as facilitators who in turn trained 2500 children across 12 of its residential government schools. External researchers were engaged to evaluate the effectiveness of the program on the students. A multidisciplinary team with backgrounds in public health and evaluation, psychiatry and psychology came together, developed standard tools, administered surveys amongst 120 children before and after they underwent training. Here we briefly summarize and review the study findings below:

Make a trail test or Trail test’ and ‘Stroop test’ were used to assess changes in attention or focus. The Trail test assesses the ability of the students to accurately make a trail between numbers and alphabets with respect to time. The test A is the simpler one, instructing students to make trail between numbers while the test B increases in complexity. More no of students completed the test B during end-line as compared to baseline showing an improvement by 48%. The time taken by students to complete the tests was significantly lesser by 21% 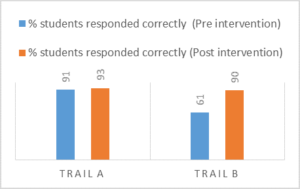 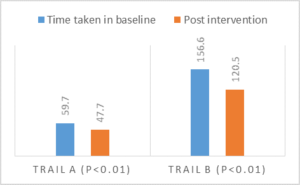 Graph showing changes in attention through Make a Trail Test

Is it possible to improve cognitive process in children? We decided to examine this question through a research study on effects of brain training programs in children. Our research team chose Mahbubnagar to observe a group of students who were undergoing Brighter Minds training. Brighter Minds program is a training program aimed at improving cognitive process by enhancing key abilities like Focus, Observation, Comprehension, Intuition, Empathy and Confidence.

Graph showing changes in attention through Make a Trail Test

Blind folded activity was used to assess the changes in observational abilities of the children. The assumption was that a blind folded child will use alternative sensory modalities, a phenomena known as sensory substitution/ augmentation that is well studied among the blind children. The average number of correct observations were noted before and after the training that showed improvement by 43% in 8 weeks.

Qualitative changes in observational abilities were also assessed. The student was given picture of a child and was asked to observe it for 45 seconds and write down his/her observations. More children were able to connect to the pictures deeply in the end-line evaluation than baseline. While in the baseline, the reports were plain and simple, more children were able to correlate with their own personal experiences and feelings during end-line. Here are few specific scenarios.

Additional observations by the school teachers

Subjective experiences of the teachers were collected through focus group discussions to see how their experience correlates with study results. The teachers observed that the children were: more calm, expressive and participatory in classes; showed increased attention span and concentration, reduced distraction; reduced hesitancy to talk to teachers in class reflecting improved self-confidence; improved memory and self-discipline. They also expressed that the program should have started in the beginning of the academic year so that the students benefit more in academics.

The independent evaluation carried out in Mahbubnagar reveals that the Brighter Minds training had positive impact on the following cognitive processes: attention, observation and memory. Feedback by teachers reinforced the same; in addition, they also reported improvements in self-confidence, expression and comprehension amongst the children. Thus the study showed positive impact on cognition and performance of children, and also showed high levels of acceptability by the teachers. In a relatively short time of less than a year, close to 2500 children were reached out through institutionalized and self-sustainable ways of training.

The study does have few limitations. An experimental research design with a control arm would have been the gold standard to study the effectiveness of the program. Experts recognize the paucity of rigorous research in this sphere and recommend addressing this gap. The tools used in the study have inherent limitations. For ex: too simple tools may not be sensitive enough to pick up small changes. The age, intelligence, language and personality of the child also has influence on its response. An attempt was made to control this through adequate observations and training. The assessments were done just before and after the training; a follow up study can be very useful to understand if the changes have sustained and if improvement continue to happen.

Yet, in the current context where few efforts are made to strengthen cognitive skills among children particularly in government educational settings, the effort by the district administration is appreciable. Though the brain training has gained popularity in the west, it is still in its infancy in the developing world including India. Latest advances in the field of neurosciences and their applications for both teaching or parenting, is yet to make inroads into the schools and homes here. In this context, the present experience of Brighter Minds seems like a promising beginning.

The west faces yet another challenge; there are too many programs in the market without necessarily being evaluated with the required scientific rigour. Both the district administration of Mahbubnagar and the Brighter Minds program administrators have recognized this and have done well to address it in its inception. Given the resource and logistic constraints, efforts to adopt a scientific evaluation that has both quantitative and qualitative components, and attempts to use the most reliable tools available today inspite of their inherent limitations, is quite acceptable.

What is inspiring is the positive results observed in the children and that too in a short span of 8 weeks’ time; this is echoed by teachers as well. In the recent times, when there is growing realization that intelligence quotient (I.Q) alone is not adequate, but should be complemented with emotional quotient (E.Q), both the parents and teachers are looking for simple and effective solutions. Brighter Minds seems like a potential option for consideration. Its simple design allows the administrators to seamlessly integrate into existing schooling curriculum as we observed in the current study, thus making it a potentially scalable, yet effective in contributing to wholesome development of a child. The world of today and tomorrow, requires leaders that are intellectually, emotionally and spiritually rich and it is high time we start thinking and acting in this direction right away.